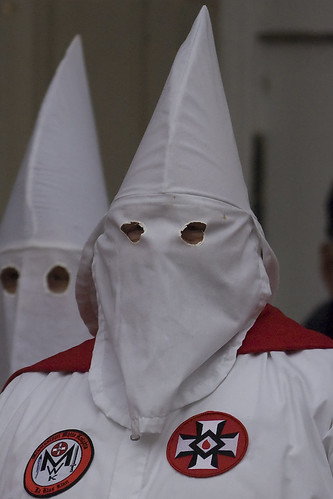 Two nights ago I had this dream about my guitar teacher Tom:

I’m at Tom’s guitar studio and outside in the parking lot there’s a KKK rally happening. Tom is putting on a KKK robe because he wants them to think he’s one of them in order to avoid any trouble.  Then Tom and I  go and sit outside to practice guitar, and a black man comes up and asks Tom if he can go in the studio to use the bathroom. Tom tells the guy no and points out the klanners and says “Can’t you see who’s here?” Tom’s worried the klanners will give him problems if he lets the guy use the bathroom.  The black man just walks in anyway though, uses the bathroom and leaves without incident.

When I told Tom about the dream he laughed and said that was really funny because just the other day he’d told a friend of his he was going to get a Bass Pro1 sticker and put it on his car to give people the message “Hey everyone! I’m a white working class Republican!”  He then proceeded to tell me that in the past when he was going to a lot of concerts and music festivals and the like he put an american flag in his car and saw that he avoided a lot of trouble with police and security that way.

Now I think Tom may have been half kidding with his friend, but we can see via the dream that I picked up Tom’s apprehension and how he was thinking about how he could avoid attracting the wrong kind of attention in what he feels will become a more openly divided and intolerant America after Trump takes office. As Donny pointed out though the dream is probably also picking up on fears of coming intolerance on the level of the nation itself, fear in people that if they don’t go along with the hating herd they’ll suffer because of it. I can also see something of myself in this dream, how I also can put on a false appearance in order to avoid trouble. As an example of this I actually voted for a third party candidate in the election to avoid having to tell my parents (who I live with and are quite conservative) that I voted for Hillary should they ask who I voted for.  I now regret that because I live in Florida where Trump edged Hillary out by a small margin and to be honest in hindsight I feel like I basically cast a vote for Trump by going that route. Now it’s true that I was in fact put off by both candidates and also that I expected Hillary to win the election handily, but I took the easy way out to avoid any possible discomfort at home and didn’t cast my vote for the person who I felt was clearly the lesser of two evils. Now to be fair I think I should point out here that my parents aren’t neo nazis or the sort of people who would show up at KKK rally.  As I’ve pointed out before, dreams often show things in an exaggerated manner to get their point across.

Now the black man at the end of the dream would seem to represent things that myself, Tom and others feeling this collective fear wouldn’t want the intolerant or rigidly moral to see. Donny suggested the idea that the fact that the black man uses the bathroom anyway without incident shows that the future may not play out as badly as people are fearing. Let’s hope that turns out to be the case.

Now it’s already implied in what I’ve written but I wanted to explicitly state how this dream shows how we can dream not only about a collective process, but also about what’s going on with people we’re closely involved with such as friends, family, co-workers etc. I’ve been taking lessons from Tom for over two years and we’re of a like mind regarding many things, so we’ve delved a little deeper in conversation than who won the football game last night. Our relationship is to some extent a friendship, and since there’s a connection there I can receive inner communication from him. To see this inner communication is useful if for no other reason than showing our inner connectedness, which Donny discussed at length in a recent blog.

This type of dream or vision can also enable you to see what’s going on with someone in order to try and take some helpful action. That happened recently with me in regards to a friend who’s a recovering alcoholic. I had a vision of her making some objects like large coins out of clay and there was a muse line with the vision that said: Mine was destroyed. At the time I had the vision I was wondering if this person had had a stumble and I was looking online for advice on how to approach someone if you think that’s happened. In my research I came to know of something Alcoholics Anonymous uses called sobriety coins which are tokens showing the amount of time someone has remained sober. After learning that I figured my friend’s sobriety coin had been destroyed figuratively speaking, but the fact that she was making new ones in the vision probably indicated that she was trying to get back on her feet. Having the vision helped me to bring the subject up with my friend and to encourage her not to get down on herself about the stumble, but to just pick herself up and carry on.

This is a pretty vast subject and I’ll probably write more about it in future on this blog, but I think this is a good stopping point. It would be great though to hear other people’s experiences in the comments.