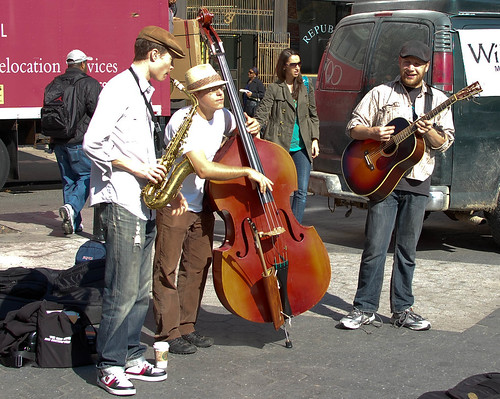 Dreams can offer guidance on all kinds of things.  Many years ago I had a dream that sent me on a brief career as a street performer.  Let me tell you the story.

Back around the turn of the century, I was living in Cusco Peru on tourist visas.  Those visas were only good for 90 days, so every three months I would head to the Bolivian border to go out of Peru for a few days and then come back with another 90 day stamp.  On one of those trips I was staying in a hotel in Copacabana on Lake Titicaca and had this dream.

I’m in front of Buckingham Palace in England and I have a crowd around me. I’m street performing telling jokes and doing pretty well.  When I’m finished I’ve got a large stack of dollar bills for my efforts.

Since I was a teenager I’ve loved telling jokes and could remember just about any good joke I’d hear.  Before the dream, I’d never thought though of doing it as a busker.  I didn’t really need the money, but it seemed like a fun way to meet people and hopefully pick up some chicks.  So I started to compile a list of my jokes, but it wouldn’t be until I left Peru for good some months later that I’d begin my career as a street comedian as I traveled through Bolivia.  I started out working in plazas in front of big crowds and passing the hat like I was doing in the dream, but gave that up in lieu of going to places where people were sitting outside drinking and then telling a few jokes at each table.  As the dream indicated I did pretty well, though the dream exaggerates as dreams often do.  I had good jokes and I am funny, but the secret of my success was I told the jokes in spanish, and for the Bolivians my gringo accent was hilarious.

Later when I got to Brazil, I was able to speak passable portuguese in a few days and continued my comedy career.  In fun loving Brazil though, I found myself being invited up on stage at times at bars and clubs and handed the microphone to tell a few jokes.  I also did a few actual shows where I was the headliner.  As in Bolivia, I was a hit with my gringo accent.

Since I was doing it mainly for fun and not for money, I mostly worked on weekends.  All that preparation was good though, because after a few months in Brazil I suddenly found myself cut off from both my bank accounts and having to rely on jokes to survive.  My debit card for my account in the United States had expired a few months before, and since I had a bank account in Peru with over $5,000 in it I hadn’t bothered about getting another one.  The ATM fees for the Peru account we’re quite high though, and I would only withdraw money from it once a month.  That was fine for a while until suddenly I found the account had been frozen due to lack of activity and was basically told I would have to show up in Peru to get it unfrozen.  So for about two weeks, as I waited for a new bank card from my USA account and fruitlessly tried to get the Peru account reactivated, I lived off jokes.  It wasn’t easy, and if I hadn’t been staying with friends I would have had a hard time paying the cost of a hotel and covering my food too.  Finally Fed-Ex brought my new debit card, and I celebrated by buying pizza for my friends. Eventually too with the help of another friend I was able to get my bank account in Peru reactivated and withdrew all the money as fast as I could.

After this financial crisis my comedy career continued in Brazil as well as in a later trip to Central America. While in Central America though, I came to the firm resolution to leave things like sex and partying behind to begin the work of Sri Aurobindo and the Mother’s yoga in earnest.  It would still be a few months before I went to live at the Sri Aurobindo Sadhana Peetham Ashram in Lodi California, but that was the turning point.  After going to Lodi and later to India, I continued to tell jokes from time to time to friends and people I’d meet, but after a while that just dropped away and I haven’t told anyone a joke in years.

In closing, I should say that, as in a recent post I wrote on dream drugs, I haven’t shared this dream and subsequent happenings because they hold any insight as far as sadhana goes.  It’s just to show people what’s possible, and also to show how dreams meet you where you are.  To be honest, when I look back at that epoch of my life, I still can feel a little vital thrill at the memory, but the more enlightened parts of me wish I had spent that time doing other things.  I guess though I just wasn’t ready to leave the vital life behind, and my inner being knowing that provided the guidance via the dream.  And while I am funny and the gringo accent was truly hilarious, the other and perhaps primary reason for my success was that it fit with my process, was what I needed to be doing.  I think that’s why in the dream I was in front of Buckingham Palace, it was my ‘royal road’ at the time.  And though I’ve moved on from telling jokes, the comedian is still there and he comes out sometimes in my writings and video work in the form of satire.  Perhaps one day I’ll return to performing comedy, but if so it will definitely be in a different form, one that would have the divine and the quest for the divine in some way as its basis.  We’ll see what unfolds.