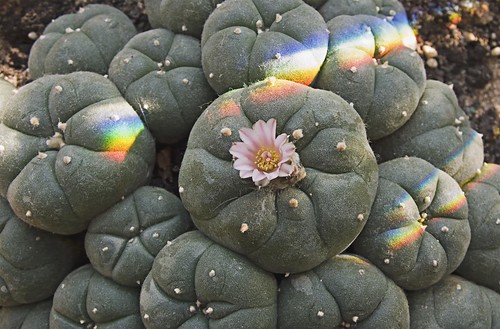 I would imagine many people have had the experience of taking a drug like marijuana or alcohol in a dream and feeling high or intoxicated while within the dream, but having the effect disappear upon awakening. This has happened to me a number of times over the years. What’s perhaps less common, but in my experience possible, is to take a drug in a dream or vision and have it produce an effect in the waking consciousness. I’m going to share two examples of this. In one instance, the effect was immediate, and in the other there was a slight delay.

The first example I’ll give occurred about 16 years ago in Mexico in the part of the country where peyote grows wild. I was out there with a group of people including Dominique, a French Canadian woman and peyote connoisseur. On that day I had not eaten any peyote. It was about mid-afternoon, and I was having a sinking spell so I laid down to rest. I didn’t fall asleep but entered that twilight space between waking and sleeping and had this vision:

I was with a group of people gathered around a fire. A deep, and powerful voice kept repeating the word “Amor” (which means love in Spanish) and I could actually feel the sound waves from the voice penetrating my dream body. Then Dominique put a piece of peyote on my tongue. As soon as the piece touched my tongue, it sent a jolt through my entire body and I was abruptly brought back to full waking consciousness.

At first nothing interesting happened, and I just got up and started to resume waking activities. After a few minutes though, I suddenly found myself filled with a large upwelling of love wanting to find some means of expression. Fellow Harm’s End editor Donny was there in the desert with me and my first instinct was to go and find him. On my end I was irked with Donny about some things, and the love helped to see that those feelings really weren’t legitimate. When I found him I told him that, and was able to clear the air as well as my vital. After that the love began to fade and then was gone. All in all I would guess that the experience lasted about 30 minutes.

Roughly a year later I had another memorable experience with a dream substance. This time I was in Nicaragua and was once again with Donny. We were staying in a hotel near the border with Costa Rica and had plans to cross the following morning. At around 4 am, I awoke from a dream in which I had been drinking coffee. Since it was still dark outside I tried to go back to sleep but found it impossible to do so because I was COMPLETELY awake. Normally I feel quite horrible if I try to get up early in the morning, but this time there was no grogginess whatsoever and my body felt energized and ready to go. As I lay there I sensed that Donny was also awake, so I told him about the dream and what I was experiencing. We concluded that there must be some purpose behind it, and that the most likely reason was to give us an early start. So we got up and went to the border only to sit there and wait for three hours for immigration to open at 9 o’clock. Go figure. Despite that however, Donny and I remained convinced that forces had moved us out of there at an early hour for a reason even if we couldn’t see it.

Unlike other posts of mine there’s no real concluding lesson or moral to my sharing of these experiences. I’ve really just thrown this out to show what’s possible and maybe spark the interest of a reader or two towards their inner life. If this possibility perks your interest then why not try for yourself? Put your intention in that direction before sleeping and see what happens. Give it a fair shake if you don’t have immediate success. I do recommend though that you approach this exercise and dreams in general with the intention to learn or to grow. While dreams can serve as entertainment for the human vital, especially if you’re a skilled lucid dreamer (I myself am not), that isn’t in my opinion their true purpose. Rather I feel dreams are an aid for our growth and development and should be approached as such.

One thought on “Dream Drugs”