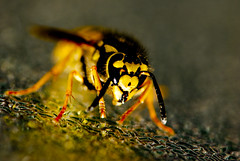 Recently I wrote a post on how my dreams used the symbol of the wasp to draw attention to my anger.   Interestingly, the day after posting that article, the wasp entered my life again, but not in a dream. Rather, these were synchronic encounters in waking life that happened in conjunction with strong movements of anger that day.   Events in the waking world can also be our teacher just like a dream can and this example really illustrates that point. Let me tell you what happened.

The daily operations of the chamber of commerce where I work are mainly handled by my co-worker Rhonda and I, and this necessarily involves a lot of collaboration and hashing things out. In general, Rhonda and I get along very well, and I find her very easy to work with overall.   Sometimes though, as in any close relationship, vital reactions come up in both of us that aren’t voiced or shown on the surface. Most of the time I can just drop these reactions, but at other times they’re played out inside in thoughts and emotions that either run their course until they die out or I successfully reject them.

On this particular day Rhonda wanted me to add our business expo to a dropdown list on the chamber’s website. I didn’t say no; I just responded that normally we only have the really big events on there. Then, rather uncharacteristically, she said in a rather snippy way, “It’s becoming a big event and it needs to be up there!” Well my vital didn’t like basically being given an order, and a smoldering resentment opened up like a black hole inside me.  I was able to detach from it, but it got in a bit, so it didn’t subside immediately. My vital wanted to lash back and thoughts on how to do so were coming up. I just tried to ignore them while at the same time acknowledging to myself that she was right.   We are trying to grow that event so it made sense to add it to the drop down list.

Shortly after this I had to leave the office to go and tidy up our mobile welcome center, which had been out of commission for a while. As soon as I got there I encountered a wasp flying around the door of the trailer. I remembered how the anger had risen earlier, but I was more concerned with avoiding getting stung. I got out the can of wasp spray we keep inside, but it flew off and didn’t return. When I got back to the office I noticed a little of the anger reaction still lingered from earlier, but it wasn’t really a problem.

I would, however, encounter a wasp again later that evening when I was taking our dog Rosie for a walk. During the walk, I saw a plastic grocery bag lying on a neighbor’s lawn, so I picked it up. As I was examining the bag, I suddenly spotted a wasp clinging to it and quickly dropped the bag and crushed the wasp under my shoe. Encountering the wasp again like that struck me as quite synchronic. I wondered how it might apply to my situation at that moment, and I thought about how I often get annoyed and impatient with the way Rosie takes her takes her good sweet time sniffing and investigating things instead of taking going to the bathroom like I want her too. So I tried to be conscious of that and resist that impulse to get irritated with her.

Then when I got home, I noticed some outside lights we have set up on an outdoor timer were switched on almost two hours early.1  I know there’s a button on the timer you can hit to turn it off or on manually and override the programming, and I figured that somehow the timer had been manually switched on. So I hit the button to switch it off, but when I did so the screen flickered erratically back and forth for a second or two between On and Off before it finally turned off.   That didn’t seem right to me and made me wonder if something was wrong with the timer.

I went out back to our lanai as my mom and dad were coming up from sitting on the dock. I mentioned what had happened and told mom I thought the timer might be faulty. Without warning my dad exploded into a short rant about how stupid the timers were, and how nobody sees the lights, etc. He was obviously testy so I tread carefully around him until he’d seemed to settle down later.   I figured the second synchronic encounter with the wasp had been foreshadowing dad’s outburst, and I think it was indeed doing so, but there was one more thing that was going to push my button before the night was over.

Later that evening mom asked me to vacuum and wash her car the next day before she left in the afternoon. Dad almost always handles washing our cars, but for some reason she really wanted it done the next day. Like Rhonda earlier, she was basically giving me an order and also did it in a snippy way. That got my goat, but I still tried to tell her in a nice way that was fine, but I’d just like to use the pressure washer and would need dad’s help to start it. Then she made a comment that all I’d need is a bucket and soap and that ticked me off even more. I have lower back problems, and anyone who does knows how difficult that can make just about anything. The kind of bending over I’d need to do to wash the car with a bucket and soap wouldn’t be easy for me, and she knows that.   The thing is though, in general I just stoically endure the back pain and don’t complain about it. Because of that, sometimes mom forgets my limitations and has even said that she sometimes forgets because I don’t complain.   My mind understands that, but my vital was not happy with her for forgetting.

I went in my room for a few minutes and thought things over. Then I went back out to the kitchen, and though the anger was still kicking around underneath, I was able to calmly explain again that I’d be happy to wash the car, but I wasn’t going to do it without the pressure washer and needed dad’s help to start it.2 Then I explained to her how it’s not easy for me to do it with just a bucket of water and soap, because in order to keep from bending over I have to constantly keep going down on my knees (I’m not flexible enough to squat) and getting back up again. I explained to her I could do it with just the bucket and soap but I’d need a cushion or something to put under my knees. At that point she just said forget it, but I reiterated that I could do it with the pressure washer if not the next day then definitely on Friday. I never did end up washing the car either the next day or Friday, since dad thought it was a waste of time with all the rain in the forecast. I did however vacuum the car the next day.

As I stated at the beginning of this post, this example is interesting because it shows how symbols can meet us through synchronicity in the waking world as well as in dreams. Going farther we can see that these kinds of synchronicities give a glimpse into the intricate interconnectedness and interpenetration of all things. They help us see that there’s a hidden meaning and intelligence in the cosmos, one that informs and presides over its unfolding behind the mask of apparent unconsciousness in the universe’s outward appearance.

Another thing worth drawing attention to is the way that, in the evening, the anger first manifested in my dad and then later in me. This shows how things like anger are a vibration that’s ‘in the air’, and can invade more than one person or even be passed from person to person. That may have happened also with Rhonda and I earlier, but it’s less obvious.

In closing, I’ll say that I believe these little synchronic glimpses are just the tip of a massive iceberg of interconnectedness that we can only truly appreciate from a higher or cosmic state of consciousness. It’s too stupendous to fit in the littleness of the ego. What would such a consciousness be like? I don’t know, but this passage from Sri Aurobindo’s Savitri casts some light on that, and seems like an appropriate way to end this post:

Interpreting the universe by soul signs
He read from within the text of the without:
The riddle grew plain and lost its catch obscure.
A larger lustre lit the mighty page.
A purpose mingled with the whims of Time,
A meaning met the stumbling pace of Chance
And Fate revealed a chain of seeing Will;
A conscious wideness filled the old dumb Space.
In the Void he saw throned the Omniscience supreme.3