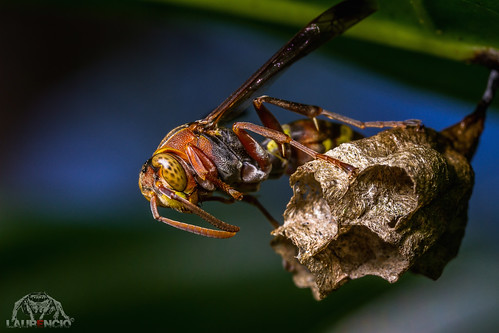 Like a lot of people I can be irritable, and while I have a tighter grip on it in public, it comes out at people close to me like my mother.   Even there though I have a pretty good level of control most of the time, but I find I have spans of days or weeks sometimes where I’m more agitated, and the irritation is more difficult to restrain. I had been going through a period like that recently, and the movement was shown in my dreams using the symbol of the wasp.  This makes perfect sense as there are few things as hostile as a wasp, and we’ve all heard the phrase “mad as a hornet.” Here are the two dreams I’ve had during this recent upsurge of irritation which feature the wasp and took place within a week of each other.

In this dream I’m in Briarcliff Circle in front of Todd Brim’s house. There’s a house being constructed across the street, and at the top of it there’s a huge wasp’s nest with big six inch wasps crawling around on it. I’m talking to RJ Snyder, and he says he’s going to pay $5000 to have it removed. And I say, “Why don’t you just call pest control and have them do it for free?” The street the house is on goes up a hill and RJ and I walk up to the top. I tell him I’ve seen other strange things in this neighborhood, and he tells me that Dhina is running around with my voice recorder and he finds that unnerving.

I’m in the garage and someone there wants me to video him with the GoPro camera. I really can’t though because the piece of plastic that frames the lens is out of place. I look under the workbench and see a wasp’s nest. I go into the house to get away from the danger and then out to the pool. As I’m walking around the pool I encounter a mirror and can see my face in it. I can see it’s really sunburned from the bottom of my eyelids on down, red as a lobster. There are a few small patches of unburnt skin though.

Like many older people my mother struggles with technology, and this is the main thing that pushes my irritation button as far as she goes. This annoyed part of me feels these things really aren’t that hard and she ought to be able to figure them out, or at least be able to remember how to do something after I’ve shown it to her a couple of times, etc. etc. Over the recent Labor Day weekend her questions and requests were coming up more than usual, and as the irritation got worse it started to come up when she would ask me about virtually anything and not just tech questions. It was just like the way some kids or teenagers will get riled when you ask them to do something, acting like you’re really imposing on them. Dhina, who is mentioned in the dream, is an Indian boy I know and is a perfect example of this kind of indignant teenager. The fact that he has my voice recorder I believe represents my speech, since my irritation manifests both as a vibe of annoyance and also comes out of my mouth. So the dream is showing me I’m acting like Dhina. The part about calling pest control I think has to do with calling on the divine for help with the irritation and not just my own resources, which the dream portrays as spending $5000. The house is something under construction in me, though I’m not sure what. That I make it up to the top of the hill is good as it shows an overcoming of the irritation on that day at least.

Though I fought back well on Labor Day, the problem continued during the week and through the next weekend. The morning after the second dream I once again gathered up my will to try and cast off the irritation’s grip on me. We had recently gotten an Amazon Firestick for our TV, and I had agreed to show mom how to use it, so I knew a test was coming in advance.   I think the dream foreshadows this with the filming with the GoPro, but in the way dreams most often do it, which is analogously and not exactly.

Perhaps though it’s more accurate to say that an event in the inner world (shown or translated by the dream) gives rise to an event in the outer world, and the relationship between those two events is analogous and not exact. Regardless I think we can see the connection here. That I flee the wasp’s nest is a good sign and reflects my effort to get away from the irritation.   I’m not sure what going from the garage to the pool might signify though the garage seems to represent dreams according to the experience of my collaborator Donny and it makes sense to me. I think the sunburn is again showing the problem with the irritation manifesting as speech since it’s mainly on the lower part of my face. And we all know how a person’s face will turn red when they’re really angry. The location of the sunburn also shows that while the irritation had gotten into the speech and action center of the mind (the throat chakra), it hadn’t reached the seat of the intellect and higher reason (the third eye chakra).

While it doesn’t feature the wasp there is one more dream I had in between the other two that also drew my attention to my irritation and merits being shared:

I’m sitting on the front porch with Dad and this girl I’ve known for about a year. She’s blond, has a lot of tattoos and is dressed in a crop top and a short skirt. She has a punk look to her. I have a computer and am looking at her Facebook page. Her cover photo is showing her left forearm (I’m pretty sure it was the left) and it has the words “black mamba” tattooed on it. I’m telling her how it doesn’t feel like a year has passed since we’ve met, that it only feels like a couple of months.

The day before this dream I had set up some outdoor timers on the front porch for some decorative lights we have outside.   Then on the day following the dream my dad went out and added a needed extension cord but thought he’d messed up the settings on one of the timers in the process. Mom told me this and muttering something indignant I went out to the porch to see what was wrong. As I was examining the timer (which turned out to be fine) the fact that I was on the porch made me remember my dream and I saw how the irritation strikes like a snake. A snake in my dreams represents some kind of hostile force or lower vital movement, and I think that’s pretty universal, though I believe a snake can represent a positive energy or movement in some cases too. My vital itself is represented in the dream by the girl, and that too seems to be fairly universal symbolism though a woman figure could certainly represent many other things.   For example if you dream about a woman you know it might represent some hallmark characteristic of hers that you’re currently exhibiting. My dad in this dream is this kind of character and represents my irritation since like many men he’s irritable with his spouse.

So what’s the lesson here? I guess for me it’s that things like irritation are hard to get rid of, and uprisings like this are part of the process until the defect is fully integrated or simply disappears by the process of spiritual transformation. There’s a fine line though between recognizing that and giving a vital movement permission to continue. The fact that my dreams stepped in like this tells me it’s no small matter and I have to continue to be vigilant in rejecting it. I do want to be rid of it though (as well as a great many other things) and that’s an important step.

It also never hurts to look at things through the eyes of understanding as Donny reminded me when I related the dreams and the irritation to him.   He reminded me to look at my mom with the eyes of the soul, see her as innocent, like a child. The fact is it’s just hard for her to figure technology out.   And when you also consider the fact that she and my dad let me live with them for free and feed me to boot, a little patience and understanding while serving as house tech support isn’t much to ask.

One thought on “Mad as a Hornet! – The Wasp in Dreams”