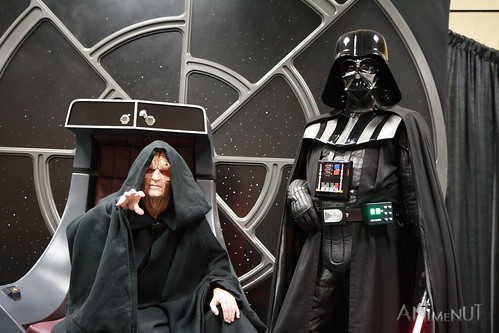 Back in 2004 I was living at the Sri Aurobindo Sadhana Peetham Ashram in Lodi California. While I was there we had a weekly dream group, and I remember one meeting very well because both myself, and another resident, Dakshina, had a cold. The dream I shared was one in which a zombie had touched me, and then I woke up ill the next morning. If I remember right Dakshina also had a dream that showed her being attacked and then she came down with the cold, but I don’t recall that for sure. Regardless, all of us there saw the connection between my cold and my dream, viewed it as an attack of a hostile force against me.

Roughly a month ago I had this dream:

It’s the scene from Return of the Jedi when the Emperor shows up in his shuttle at the Death Star. He is talking to Darth Vader telling him some scheme he’s cooked up and wants to show him something that has to do with it. They both board the shuttle and the Emperor shows Vader these two aliens that are basically just heads with tentacles coming off of them. They’re very ugly. I guess they are babies of an alien species, and were kidnapped by the Emperor. Vader thinks this is really cool that they’re going to be watching over these babies.

Now if I remember correctly the day before the dream (Friday) Jana got sick in the afternoon. Then on Saturday, the day of the dream, Dhina caught it too, and Lydia went down a day or two later. Jana and Dhina had it really bad with a fever and body aches, and were spending most of their time in bed. Lydia stayed sick the longest, and had a relapse after initially feeling better. Mugu got it too, and was mildly ill for a couple of days. Donny and I managed to keep it out for days, but then we also came down with symptoms, Donny with chest congestion and myself with a bad runny nose. We were both however only sick for a day. I drank two cups of the Indian version of chicken soup, called rasam, before going to bed and woke up feeling fine the next morning.

Now this dream isn’t as clear cut as the zombie one I had at Lodi, since I myself got sick the very next day, but this illness really lowered the energy of the house and made things difficult since some of the kids weren’t able to give even the grudging help we can normally get out of them. The Mother does say in Questions and Answers that a hostile attack “takes often the form of illness”1, and given the impact it had it seems to me a reasonable hypothesis that this illness, represented by the ugly aliens, was the scheme the hostile forces represented by Vader and the Emperor were hatching. As to why the attack was launched at the particular moment, I would guess it was because it was a few days before a darshan day at the Sri Aurobindo Ashram, and I suspect the attack was trying to spoil the darshan for us not just on the level of the individuals, but also on the level of the house itself, since it also is an entity in its own way. Unless you already believe in these sorts of things, there’s no way I can convince you the darshan days observed at the ashram are power days like a solstice or an equinox is, a day where there’s a force available to help you make a progress or have a powerful dream or some other kind of inner experience, but if you can at least accept that idea in theory, then I think you could see why forces hostile to spiritual progress would try to sabotage people in the yoga on those sorts of days.

It bears mentioning that the day before the darshan another thing happened that really lowered the energy of the house, which was getting the house sprayed for ants. Now in the USA when we get that done the exterminator will spray a little poison in the corners of your house and maybe put down some poison bait, and that was what I was expecting to happen. Here in India however they went all through the house spraying poison heavily along all the walls, so there were literally puddles of it all along the inner perimeter of the entire house. The stench was horrible and after the first round had dried they came along a few hours later and did it a second time. That second round took a couple of hours to dry, and then we were finally able to mop the floor, but the smell lingered for days. If I had known what they were going to do I would have never had them come and treat the house except for the ground floor, which had to be treated for termites. I’m sure it was even more grueling to endure for the people who were really sick, so it seems to me that the forces attacking us had a hand in seeing to it that the exterminator showed up on that day.

Now as it turns out I myself still had an okay darshan day, felt some calm that day, but nothing really interesting happened, nor did I have any powerful or lucid dreams. I did have a little inner opening and got a short formation of lines from my muse and then another longer formation two days later before things went back to the way they usually are which is a line or two here and there. Neither Donny or I had much luck interpreting those formations though, since it wasn’t clear who or what they were relating to, but it was nice to get that little opening. So what was accomplished by this hostile attack is hard for me to say, but I know that even though I wasn’t sick, when I was sitting in my room in the stifling stench of ant poison, the energy of the house felt very, very low, and that even the house itself as an entity was affected. None of our young people here are trying to follow the yoga of Sri Aurobindo or any other yoga for that matter, but we still have a collective process here. So maybe it was that collective process that lost the chance to make a progress. That’s just speculation however.

A question though this dream brings up in my mind is how do you know when a symbol in dream or vision actually relates to an illness? In the dream I had years ago in Lodi, illness was represented by a zombie, and in this dream, if I’m interpreting it correctly, the illness was represented by the ugly aliens. In addition, I wrote a blog post a while back in which a zombie seemed to represent a vital movement I was trying to throw out, so there doesn’t seem to be one universal symbol that can be pinned down as always being the symbol for an illness. If there is some way to know though when a dream is forecasting an illness, and that dream comes before the illness actually hits you, you could prepare, but like it is so often in dreams you usually don’t know what a dream means until afterwards.

This post is mainly just food for thought, but the knowledge, however, that there really are hostile forces and beings trying to keep us from progressing is important to see, and it’s something that at some point we’re going to wake up to as a species. The fact that it isn’t known or being talked about presently except on a very small scale is aiding the cause of these hostile forces. So if an article like this has helped someone to see that or opened their mind to that possibility or even just validated their beliefs about such things, then it’s served a purpose.

One thought on “The Emperor Has A Scheme”