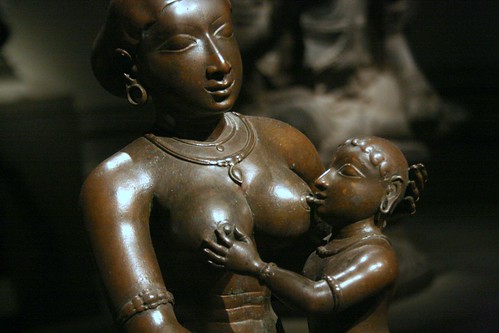 (Authors note: This story was written a number of years before the death of Sai Baba.  I was also living within walking distance of the ashram of Mātā Amṛtānandamayī Devī at the time of writing.)

When they (men) think of a manifestation of Divinity, they think it must be an extraordinary perfection in doing ordinary human things…or else they think of things which they call superhuman like not eating food or telling cotton futures or sleeping on nails or eating them. All that has nothing to do with manifesting the Divine. 1 – Sri Aurobindo

Despite having only had two hours of sleep, I literally leapt out of bed after receiving my wake-up call. I could hardly contain my excitement, the excitement that had kept me awake all night long. Today at last, at long last I would look upon the face of God Herself. For I was in Puttaparthy and today I would attend the darshan of Her Holiness Sri Sri Satya Sai Mama, the Galactic Avatar and reincarnation of the great Sai Baba.

Quickly I showered and dressed whilst singing hymns of praise to Her Holiness. Then banishing all vanity from my consciousness I examined myself in the mirror. Judging myself fit to be seen by Her Holiness, I then stood before my small altar. I thanked Mama once again for bringing me here on the first of what I hoped would be many pilgrimages to Puttaparthy. I prayed to her for guidance and strength and to help me be ready to receive what I needed during the holy darshan.

Then I was out the door and bounding down the stairs to the lobby. Upon seeing my obvious excitement the receptionist commented, “Your first darshan, eh?”

“Sai Mom,” I replied and I hit the streets of Puttaparthy where I was immediately solicited by the hover-shaw drivers. I politely declined. This was a pilgimage and I was going to go on foot.

My excitement grew and grew the closer I got to the ashram gate till I thought I might burst. Others of the faithful were on their way to the ashram and a few of them upon seeing me smiled kindly and remarked, “First darshan, eh?”

Then the gate was in sight and it was all I could not to dash inside, but I managed to keep a hold of myself. Then as I passed through the gate my eyes beheld a sight that transmuted my excitement into awe: the Samadhi of the great Sai Baba.

Slowly and with slightly faltering steps I approached this most sacred of all shrines. It was just like the pictures I had seen. There sealed inside a sphere of bazooka proof glass was His Holiness wearing his orange robe and seated in his favorite chair. His eyes were closed and his hands were folded on his lap. He appeared to be merely resting with a look of serenity on his holy countenance. It was truly amazing what the surgeons had done with him. You never would have guessed His Holiness had fallen to his death while giving a helicopter darshan. It undoubtedly helped that his fall was broken by two devotees and a toy poodle, but nevertheless it was amazing. On either side of His Holiness were two simple marble crypts which contained the two aforementioned devotees who, while others ran in fear, had adoringly received God as he descended upon them from above. In front of His Holiness was a much smaller crypt which contained the loyal poodle that never left his masters side. All three has been granted sainthood and Sai Mama had revealed that for their devotion they had all been granted instant enlightenment just before they were crushed beneath His Holiness.

Then awe changed into gratitude and tears streamed forth as I fell upon my knees in front of His Holiness. I bowed down before Him, thanking Mama for this grace, this wonderful grace to be here in Puttaparthy! Then I was lost in a wave of adoration chanting the mantras of the great Sai Baba.

After some time, I came back to myself. I rose up and bowed to His Holiness one last time and departed from the Samadhi. I looked at my watch and saw it was 6:30. Darshan was at 7:00 and I wanted to be early so I started making my way towards the temple. When I got about halfway there I spotted a man with a large tank on his back. A number of people were gathered around him and he was dispensing something from the tank into little cups and giving them out to the people. I was a bit confused by the whole thing until I saw the liquid was white. Then it hit me. It was the Holy Milk of Sai Mama!

Like her predecesor, Sai Mama was a worker of miracles. Sai Baba had possessed the ability to manifest solid physical objects at will such as watches, rings etc. His trademark miracle however was the Holy Ash which he produced in copious amounts from his bare hands. Sai Mama never materialized objects as such but her trademark miracle was the limitless supply of Holy Milk that flowed forth from her ample breasts. At night her breasts were connected to hoses and as she reposed in samadhi the Holy Milk would flow continuously into refrigerated tanks below. I deduced that the milk this man was giving out must have come from last nights store.

I was understandably possessed by a strong desire to partake of the Holy Milk but I restrained myself. I could wait until the Darshan. That milk was for those who wouldn’t be in attendance.

So I continued on my way almost giddy now. When I arrived at the temple I showed my token to an attendant who directed me to the left. Then I found myself at the security gate and once I had passed through a metal detector, a frisking, a latex glove cavity search and an ultraviolet decontamination chamber, I was in.

I almost couldn’t believe I was there. There were many people there both foreigners and indians. At the end of the room was the pillared platform with the carved wooden door through which Her Holiness would enter. I was just standing there dumbfounded until an attendant snapped me out of it.

“Sai Mom,” he said, “Please come this way to the foreigner’s section.”

He led me to the front of the temple where the foreigners section was. The hall was divided into four seating areas: one for foreign men, one for foreign women, one for indian men and one for indian women. Since it was my first darshan I was given a front row seat in the foreign men’s section. I sat down and my heart leapt with joy. In mere minutes God herself would walk through that door to give her holy darshan.

Around me others were meditating or chanting softly to themselves. I didn’t know how they could do it. It was all I could do just to sit still. I was constantly looking at the clock as the last few minutes ticked by. At 6:59 a group of young men dressed in orange robes and with shaven heads entered and sat in formation in front of the pillared platform. I immediately recognized them as Sai Mama’s famous eunuch chanting choir. When the clock struck 7:00 they began to chant and just before it reached 7:01 the door swung open and there she was––all 350 glorious pounds of her.

Immediately the temple exploded into a chaotic chorus of Sai Mom’s and other utterances of adoration. Sai Mama kindly waddled forward and raised her arms before the crowd. Now I too found my voice and joined my Sai Mom’s in with the rest. My vision blurred as tears poured down my cheeks and my heart was filled with a love that seemed uncontainable.

With a finger to her lips Mama hushed the crowd. Then, with a speed that would rival Billy the Kid, Mama withdrew one of her gargantuan breasts of bliss. The hall exploded once again in Sai Mom’s as Mama waddled towards the indian men’s section of the temple. There all Sai Moming ceased as the indian men opened their mouths and tilted back their heads eagerly awaiting the Holy Milk.    Mama stopped a few feet in front of them and paused. Then seizing her breast with both hands she squeezed it sending a 50 foot long arching spray of the Holy Milk over the crowd. Slowly she turned her body from one side to the other a couple of times like a sprinkler showering the entire section. Then satisfied she turned and waddled towards the indian women’s section. The indian men, meanwhile, broke forth in praise and Sai Mom’s as they sucked at their wet clothes and licked the floor for every drop they could get of the Holy Milk.

Mama repeated the same process at the indian women’s section and the foreign women’s section. Sai Moming was going on all around me but I remained silent. Never had I felt such awe and reverence as the greatest sacrament the world has ever known was performed before my eyes.

Then, having finished with the foreign women, Sai Mama turned around and began waddling towards us. Once again I found my voice and was crying Sai Mom as she approached. When she halted in front of us I opened my mouth and tilted back my head. I closed my eyes as the first drops fell upon me. Some drops went into my waiting mouth and I sighed with happiness as I tasted the sweetness of it. It was heavenly, rich and creamy with a hint of vanilla. Bubbling with joy I waited for the shower to pass over me again. After a few seconds it came again and went. It came a third time and a fourth time and each time it was sweeter than the last, each time my love and joy reached a greater apex.

Then the heavenly rain ceased and I opened my eyes. Mama placed her breast back within her robe and waddled to the pillared platform. Around me the other foreign men were sucking at their clothes and licking the floor, but I only had eyes for Sai Mama. The man sitting next to me grabbed my scarf and was wringing droplets from it into his mouth, but I hardly noticed. My being had melted into a wave of pure adoration which swelled with every step she took.

When she reached the platform she turned and raised her hands one last time and the temple exploded once again in Sai Mom’s. The eunuchs began to chant once more and with a smile Sai Mama turned and walked out through the great carved door.

As the door swung shut I bowed down to the floor beside myself with joy and gratitude and singing praises for the great Sai Mama. I don’t know how long I lay there lost in devotion, but when I raised my head from the floor almost everyone had gone. As I rose to my feet I realized in the core of my being that I couldn’t live away from this ashram. There I remained for one glorious month after which I returned to Johannesburg and sold my men’s lingerie shop as well as all of my possessions. Then I returned to Puttaparthy and here I remain, fulfilled in felicity only to be near her. Everything I have, everything I am belongs to her now.

Praise and glory be sung for the great Sai Mama. May all beings find refuge at her lotus feet. Sai Mom!