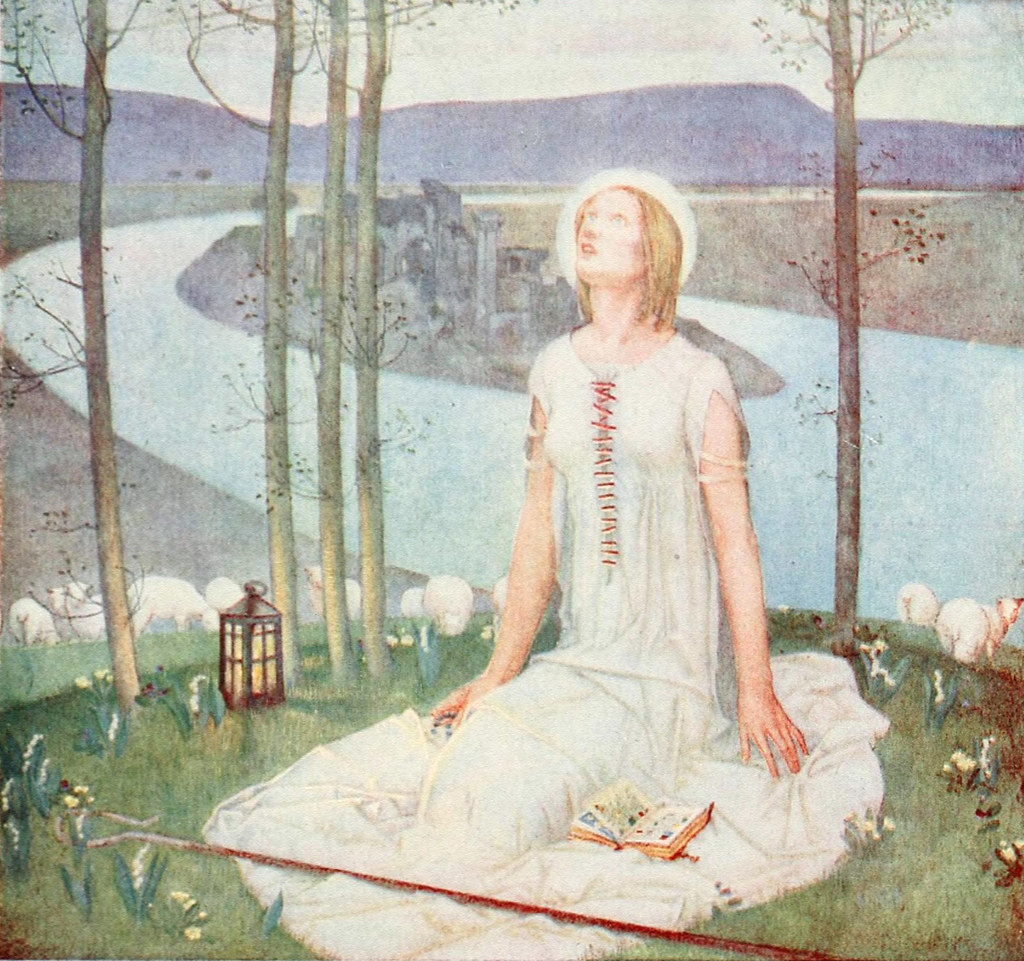 This new biography of Joan of Arc by author Helen Castor recently caught my eye on the new release rack at my local library.   At the time, I honestly knew precious little about Joan of Arc other than she fought against the English, was burned at the stake and heard what she claimed were divine voices, so I was curious to know more about this historical spiritual figure and checked out the book.

I don’t know how other biographies of Joan have handled things, but this one rightly takes its time in setting the scene, starting with the British invasion and then navigating all the different twists and turns of the war until Joan arrives on the stage fifteen years and eighty-six pages later.   In doing so, the book really gave me a stimulating glimpse into the mind of the times I previously didn’t have. The middle ages weren’t something I knew a whole lot about either other than what stuck with me from high school history i.e. there were kings and knights, the pope and the Inquisition, the bubonic plague, a lot of wars, and your average person was basically miserable and oppressed.   The book shows a lot about what a powerful force religion was back then. It’s not really clear from the book how your basic peasant looked at things, but the nobles and the clergy looked for evidence of God’s favor or disfavor or even whose side God was on in events like the outcome of battles. And if you lost a battle in a particularly ugly manner, like the French did at Agincourt, the clergy would debate amongst themselves as to which sin it was and committed by whom that brought the misfortune upon them. They also used signs and portents to determine what actions to take and when to take them. It was also not uncommon for people to claim to hear divine voices, and thus the means of discerning who was hearing the divine and who was hearing the demonic was a topic of no little import amongst the clergy of the time.

With the groundwork patiently and properly laid by the author, our firebrand Joan then enters the picture as the strategic river city of Orleans is under siege by the English. We quickly see that Joan is remarkable for more than just hearing voices. The book makes very apparent the incredible force of personality of this simple God-loving peasant girl who balked convention by wearing men’s clothes and who rose to a position of military leadership at a time when that was unthinkable.   France was desperate to be sure because if Orleans fell that may have spelled the end for the French and they knew it, but Castor clearly shows that what was equally if not more important was Joan’s intense will and conviction in her God given mission to drive the English from France and to give her King his official coronation.   That conviction revives the reeling French morale and inspires Joan’s men to achieve a series of stunning military victories.

But even after her fortune turns and Joan is captured by the English, her incredible will and resolve persist as she endures seven months in captivity followed by a grueling trial for heresy. I couldn’t help but marvel at the way a nineteen year old girl with no education to speak of stubbornly and courageously stands up to some of the greatest legal and theological minds of the day, confounding their attempts to manipulate her and refusing to repent her heresy even after they get what they need to convict her. And I equally couldn’t help but understand her moments of weakness and despair, such as when she attempts to jump to her death from her prison and later, when faced with being burned at the stake, her decision to sign a statement of abjuration.   I mean who wouldn’t have such moments under such circumstances? In the end though, Joan chooses the fire and recants, though history isn’t totally clear on that.   As the book points out, the English may have taken away her woman’s dress and left her with nothing to wear but her men’s clothing which was a breech of her abjuration. Regardless, this time Joan goes through with it, calling the name of Jesus as the fire takes her life.

Even in death though Joan’s promise was fulfilled, and the English were driven from France twenty years later. Five years after that Joan was vindicated and her conviction of heresy overturned in a trial as equally biased as the first.  Then, nearly 500 years after her death, she was canonized as St. Joan. Thus today it’s generally assumed that St. Joan was hearing divine and not demonic voices. I too held the belief that Joan was divinely inspired, but reading this book gave me the chance to take a more in-depth look at things. I must admit that after taking that look I find myself of the same opinion, though I don’t discount the possibility that there was some undivine admixture in her voices. Regardless of that, however, the way she came on the scene at such a critical moment and the fact that France’s salvation was in such an unusual package, speaks to me of divine intervention.   In addition, her stupendous and unwavering conviction and the effect it had on both her troops and her country, though short lived, suggests to me that a power much greater than hers was at work through her, and that for whatever reason the English conquering France would have somehow gotten in the way of the divine plan. It seems to me that Joan may have been what in Hinduism is known as a Vibhuti. For those not familiar with the term Sri Aurobindo defines it by saying that “A Vibhuti is supposed to embody some power of the Divine and is enabled by it to act with great force in the world.”1

But regardless of whether I’m right or wrong about Joan, I would encourage anyone intrigued by this review to take a look at what I found to be a riveting and engaging look at this fascinating historical figure and her times. And if I am right perhaps like me you’ll catch a window looking in on the workings of divine intervention.