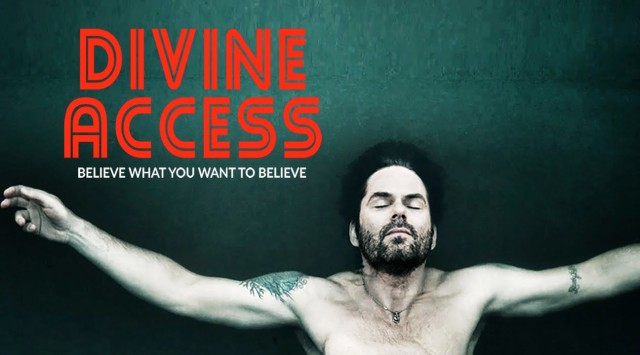 Some months back I posted a movie review of the Jamin Winans film The Frame, and though I am a proponent of the film for various reasons, I make it clear I don’t consider it a spiritual film. To justify that I threw out a working definition of what I thought a truly spiritual film would be. I consider a spiritual film to be one that acknowledges in some way that our true purpose in this world is a shift in identity, a change in consciousness resulting in an actual lived experience of ourselves as God, Being, Oneness or whatever you want to call it. Recently, I saw a film which I feel isn’t quite knocking on the door of that definition, but it’s at least turning in the driveway. That movie is the recent independent film Divine Access.

This movie is worth seeing for a number of reasons not the least of which are great performances by much of the cast. It also has an entertaining and to a certain extent meaningful story punctuated by some very clever and amusing satire on religious veneration, new age spirituality and gurudom.

The main character is Jack Harriman, who grew up making the rounds of the New Age circuit with his New Age mom accumulating a vast wealth of teachings and scriptural quotes from Buddhism to Christianity and everything in between. Growing up in that free love atmosphere, Jack also fostered his passion for the opposite sex. Fast forwarding to the present we find Jack as a 40 something underachiever whose life largely revolves around his johnson and trying to bed as many women as possible.

Things change though when Jack’s friend Bob, who’s aware of Jack’s vast religious knowledge, invites him as a guest on his no-budget late night cable access show Divine Access. On the show Jack debates and shows up current host Reverend Guy Roy Davis, and after a favorable response from viewers, Guy Roy is out and Jack is in. Things pick up steam from there on out when, by Bob’s prompting, Jack gives a talk in town, and one viral video later Jack embarks on an inspirational speaking tour of the southern United States. His main motivations though for going on the tour are to make money, ‘selling ideas for cash’ as he puts it, and to hook up with loose women who are attracted to his celebrity status, and who are propositioning him via email. Jack claims not only to have no original ideas, but also no belief in the things he says. From his perspective he’s giving people hope, and as long as the people believe what he says that’s what matters.

Among the important supporting characters in the movie is Nigel, who works as a ‘catcher’ catching fainters who’ve been slain in the spirit1 at religious revivals. He tags along with Jack to serve in that capacity if necessary and also keeps a journal chronicling the events of the speaking tour as well as Jack’s teachings. Another character is Amber, a down on her luck prostitute who presents Jack with the chance to help a woman unselfishly as opposed to trying to get her into the sack. Then there’s Marian, a mysterious woman who knows things about Jack that she shouldn’t and pops in at different points in the story to challenge Jack’s indifference and call him on his behavior. She represents a divine element in the movie since she’s obviously not a normal human and she can appear superimposed over other people as well as vanish into thin air. What is she, some form of God,  an angel, or a representation of Jack’s soul? The movie never actually tells you, but it does show that she can be seen and heard by other people than Jack, so she’s not just a figment of his imagination.

The story also periodically shifts to follow the exploits of Reverend Guy Roy, who blames Jack for the loss of his late night TV pulpit and who he views as a minion of Satan. As the hapless Reverend’s life and mental stability come unraveled, things build to a final showdown with Jack at the movie’s climax.

Now I won’t tell you what that climax is, but I will say that I was at first disappointed with it. Afterwards though, I realized it would have been hard to take the story any farther without it crossing the threshold to a spiritual movie and actually addressing the idea of a shift in consciousness. As it is, Jack’s wisdom is mostly along the lines of what you’ll mainly find in trendy best sellers from the Self-Help section of your local bookstore.2 It’s not pointing people to that change in consciousness. In addition, Jack’s growth is towards the genuinely sattvic3 man that he is and is trying to deny. It’s not a growth toward surpassing man.

Regardless of that, I’ll say again that the film is well worth seeing. It’s a story of growth and redemption and of accepting one’s destiny, and because of these things I feel it stands out from even the small crowd of independent films. Ultimately it’s a ‘human’ story and not an ‘exceeding the human story’, but it does have the element of divine help in the figure of Marian who is pushing Jack towards self-betterment. That, for me, is what really raises the other elements of the film to a step on the way to a truly spiritual movie, puts it in the driveway. For those thirsting for such a movie I think, like me, you’ll find a little sustenance in Divine Access.