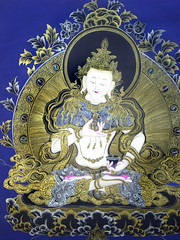 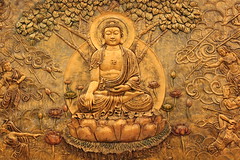 Strangeness to be nothing

Is to be all that is.

Evil, according to Sri Aurobindo, is not coeval or coterminous with the Divine, it is a later or derivative formation under given conditions, although within the range and sphere of the infinite Divine. Evil exists as a stern reality; even though it may be temporary and does not touch the essential reality, it is not an illusion nor can it be ignored, brushed aside or by-passed as something superficial or momentary and of no importance. It has its value, its function and implication. It is real, but it is not irremediable. It is contrary to the Divine but not contradictory. For even the Evil in its inmost substance carries or is the reality which it opposes or denies outwardly… As we have said, evil is a formation necessitated by certain circumstances, the circumstances changed, the whole disposition as at present constituted changes automatically and fundamentally.

Nolini Kanta Gupta
From ‘The Yoga of Sri Aurobindo Part 4’

This morning my friend Janet’s long ordeal with cancer finally came to an end.  The last time I saw her a few days ago in hospice I read her a passage from Sri Aurobindo’s Savitri about the soul.  I share it here as a tribute to her but also for the benefit of the reader.  It’s long but well worth the time to read.

A being stood immortal in transience,

In whose wide eyes of tranquil happiness

Which pity and sorrow could not abrogate

Observer of the silent steps of the hours,

And the passing scenes of the Everlasting’s play.

In the mystery of its selecting will,

In the Divine Comedy a participant,

God’s delegate in our humanity,

Comrade of the universe, the Transcendent’s ray,

She had come into the mortal body’s room

To play at ball with Time and Circumstance.

A joy in the world her master movement here,

The passion of the game lighted her eyes:

A smile on her lips welcomed earth’s bliss and grief,

A laugh was her return to pleasure and pain.

All things she saw as a masquerade of Truth

Disguised in the costumes of Ignorance,

Crossing the years to immortality;

All she could front with the strong spirit’s peace.

But since she knows the toil of mind and life

As a mother feels and shares her children’s lives,

She puts forth a small portion of herself,

A being no bigger than the thumb of man

Into a hidden region of the heart

To face the pang and to forget the bliss,

And labour mid the labour of the stars.

This in us laughs and weeps, suffers the stroke,

Exults in victory, struggles for the crown;

Identified with the mind and body and life,

It takes on itself their anguish and defeat,

Bleeds with Fate’s whips and hangs upon the cross,

Yet is the unwounded and immortal self

Supporting the actor in the human scene.

Through this she sends us her glory and her powers,

She gives us strength to do our daily task

And sympathy that partakes of others’ grief

And the little strength we have to help our race,

We who must fill the role of the universe

Acting itself out in a slight human shape

And on our shoulders carry the struggling world.

This is in us the godhead small and marred;

In this human portion of divinity

She seats the greatness of the Soul in Time

To uplift from light to light, from power to power,

Till on a heavenly peak it stands, a king.

In body weak, in its heart an invincible might,

It climbs stumbling, held up by an unseen hand,

A toiling spirit in a mortal shape.

Here in this chamber of flame and light they met;

They looked upon each other, knew themselves,

The secret deity and its human part,

The calm immortal and the struggling soul.

Then with a magic transformation’s speed

They rushed into each other and grew one.

“The goodness which one man may express in his relation to another is derived ultimately from his own divine soul and is an unconscious recognition of, as well as gesture to, the same divine presence in that other. Moreover, the degree to which anyone becomes conscious of his true self is the degree to which he becomes conscious of it in others. Consequently, the goodness of the fully illumined man is immeasurably beyond that of the conventionally moral man.”

By Medhananda – from his book The Way of Horus.  This commentary is on the hieroglyph above.

Let us forget about doomsday and the last judgement.
The weighing described here is going on all the time
in ourselves.
Something in us not only maintains
our chemical and hormonal balance,
but also tries to prevent the heaviness of our heart
from upsetting our delicate psychological equilibrium.

On top of the balance sits THOTH,
the ancestral teacher,
ready to intervene and help us.
The power wearing the wolf mask
is our higher self in its role of evolutionary force,
contributing also to the steadying of the scales.
The neter of truth appears
as the weightless standard for our heart
and as the ‘double truth’
always wearing the feather which emphasizes her lightness,
the ankh symbol of eternal life
and the lotus scepter for rebirth.

The scales represent a psychological exercise
to be practiced at every moment of the day:
weighing our heart against the feather of truth,
calling to the transfiguring power to help us
jettison everything that contributes
to our heaviness,
to let us soar free.

The disciple of truth is light-minded and light-hearted.

Let every day be a psychological levitation,
a pure longing for the heights of our own being,
a new birth into a new weightlessness.