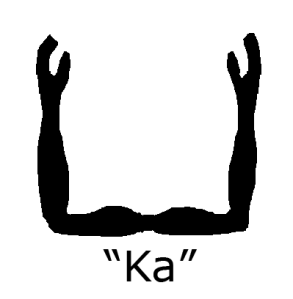 By Medhananda from his book The Way of Horus

One of the most powerful movements in man
is the will, the aspiration to overcome his limitations.

It appeared in a few carbon rings
as the power to reproduce themselves;
it appeared in a few unicellular beings
as the power to unite,
in a few fish to crawl on land,
in a few proto-hominids
to tame fire and invent instruments,
and in a few men to a walk on the moon.
It is not his cleverness that makes man man,
it is his will to surpass his limitations,
to go higher, wider, deeper than anyone has gone before,
as well in the inner as in the outer world.
Perhaps we should live more often and more consciously
in the company of this evolutionary power
the we experience as aspiration: our KA*.

If this neter* calls-
dddddddthe others answer back.

It is invincible, on one condition:
that it is exercised.
There are still amoebas in every drop of water.
But we are the amoeba who exercised.
Will we travel to the stars?

Notes
* KA was the Egyptian word for aspiration and neter was the word for a god such as Osiris, Isis, KA etc.  Medhananda considered the gods to be parts of our psychological makeup and not something outside ourselves to be worshipped.